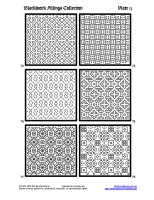 This is the last of the pages that mostly contains patterns from my first booklet. You’ll recognize #73 as having been on my Eve Was Framed unfinished sampler as one of the collection of strip patterns. The others are all on my blackwork underskirt.

Let’s start talking about how I did these.

I’m using GIMP. It’s an open source drawing/drafting/graphics editing program. I won’t got into the technical details of the thing, but the important points to know are that it’s available for free, it’s implemented for Windows in English, Spanish, French, German, Italian, Japanese and several other languages. It’s also widely used by Linux people, who often have it as part of their standard software set. GIMP also can run on Macs. You can download it here (click “show other downloads for Linux and Mac). User and tutorials manuals are here.

To be honest, GIMP is a little bit intimidating if you’re not used to programs like Photoshop or Illustrator. If you’ve only used Powerpoint type graphics or dedicated stitching programs, I’d suggest saving sitting down with GIMP until you have some quiet time, no deadlines, and a calming cup of cocoa. I don’t profess to know this program at more than entry level. I have only tinkered with a very limited number of features, for only one specific purpose, so please don’t write to me asking for help. Pretty much everything I know will be contained in the next several posts. But these should be enough to get others started using it for graphing line unit patterns.