SO MY STOLE DOES GROW

I’m in the home stretch now, well past the line of reflection in the center.  The figures at this point are straight repeats of those already accomplished.  Plus I’ve long since aged off the line by line prose instructions.  It’s far easier – for me at least – to keep track of where I am and spot check my progress against a visual chart than a mass of line by line directions.

And here’s a close-up of the center mermaid for Kathryn and Hastings:

The first shot above was taken with the stole patted out on my bed.  It’s worth noting that it’s a king-size bed, and the stole as it is right now stretches almost entirely across.  I don’t know how I’m going to block it here because I can’t pin it to the marble floors.  I might have to wait until we get a rug, provided of course, the rug is large enough.

In other news, India continues to delight and baffle me.  A new found friend gave me a flyer for a western-style bakery that does home delivery.  Tired of supermarket bread and my own feeble attempts at roti and parathas, we chanced it.  “Look!  Bagels and Danish!”   Here’s what we got: 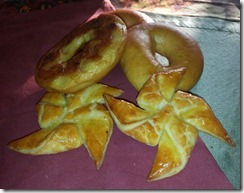 The Danish were nice – flaky, but very sweet.  These are fruit.  The cheese ones were also flaky, and being less sweet, even better.

The bagels though were open to wider interpretation.  As a toroid breakfast bread, they were fine grained, more like a pierced Pullman loaf than a bagel, clearly made from a raised dough with more butter in it than the bagel standard.  Also they were neither boiled nor crusty.  However they did go nicely toasted, with butter and cheese.  The verdict – o.k., certainly a better start to the morning than the local equivalent of Wonder Bread, but are perhaps an bagel incarnation informed only by pictures, conceptualized and baked by someone who has never eaten one.  But labels are only labels.  I say pass the “bagel” – tomorrow’s will go great with Nutella.