PRECISION IN ALL THINGS? 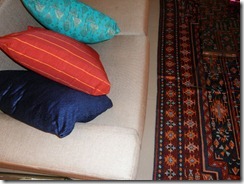 I picked the blue, red/orange stripe, and turquoise/gold from memory, and they work, even in spite of my equivocal photographic skills, and the flash-wash that makes the red pillow look paler than in real life.  There are six pillows in total, two of each fabric.

Moving on, here’s progress through Row 103 of the Dozen shawl that I’m test-knitting:

It’s growing into a feral, interlaced dahlia of a design, which you can begin to see in this rough pin-out.  Additional width will be more of the same.

And then there’s the Sarah Collins sampler kit, upon which I’ve started but have made no real progress:

Maybe I’ve ridden at liberty for too long, working at whim instead of direction.  Maybe I’m too much of a tinkerer to do a stitched design laid out by someone else, or I have a touch of compulsive perfectionist in my soul – but for whatever reason, this kit is already driving me nuts.  Don’t get me wrong, it’s a complete kit, thoughtfully laid out and as a reproduction, extremely well documented.  The unruly element is me.

For example, it pains me to mindlessly duplicate the mistakes laid down by the original stitcher.  See that twist column to the left of the frame?  That’s verbatim to the pattern’s directions.  But I tried, and tried, but just couldn’t let it sit that way.  See the twist inside the frame, with the completed centers?  I **had** to do it.  I’ll probably pick out the offending imperfect twist and re-do it to match the edited bit.

There’s also working up the double running for this panel in two colors of sienna.  The blue flower doesn’t bother me, I find that adorable.  But using two threads for the framing spiral, alternating colors is maddening.  It’s clear to me that dear Sarah might not have marled and finger-spun her threads properly, or perhaps ran out of one of the two shades, and that’s why the panel is done in alternating two-tone.  It’s all I can do to grit my teeth and work as directed, because if I don’t, I risk running out of a color before the kit is done.  Getting more matching thread, especially here, would be difficult in the extreme.

And then there’s the format of the charts.  They’re huge, and orchestrate a stitch for stitch path, with every single one numbered.  There are sufficient map pages in the thing to chart one’s way from Boston to Mumbai by rail (including the sunken parts via Atlantis).  Paging through them is an exercise in where-the-heck-is-page-2b-left-got-to-now?” – then finding it under the sofa.

I’m also not fond of the indicated stitch logic.  The paths described are not the ones I would choose.  I tend to key off established bits, so that I can proof new sections against clean counts as I work.  There’s too much “where no man has gone before” in this piece, with extremely long runs worked in advance of the growing body of work, and no way to confirm fidelity as one progresses.

Is there a moral to this story?  Perhaps, not.  But I have to admit that today’s post reveals that I’m a ruthless stickler for detail, caught up in color matching from memory, precision adherence to knitting patterns (where forays into originality are better left for after one has grokked the source design); but temperamentally incapable of similar fidelity to oh-so-obvious stitching directions.  Mark it up as another character flaw, pass me a glass of wine, and move on, please.