Just to vex my new readership, I start a totally unhistorical stitching project.  Well, not to vex anyone actually.  This piece was bespoken by The Resident Male a while back.  I’ve thought about it for several years, and decided to finally do it.  The ultimate purpose is a piece to hang on the wall of our Cape Cod place, as part of a large collage of sea life art.

The design is based on a double-koi motif, where the fish are circling each other.  I began with a clip art of a single fish, and simplified it, changing proportions and angles, and removing detail that would be obscured by my chosen stitching style.  Then I mirror imaged and flipped a duplicate of my first fish, placing it opposite it’s sibling, and trying to get them more or less balanced and centered as a composition.

For the last bit – the “water lines” in the background, I thank the Public Domain Review, for posting a link to a book of traditional Japanese wave and ripple designs – Ha Bun Shu, by Yusan Mori (circa 1919).  My chosen ripple was taken from page 22.

So, with my inspired-by fish, and borrowed water lines (with some of my own extensions to eke out the composition’s dimensions), I end up with this – already shown window-traced onto my prepared ground: 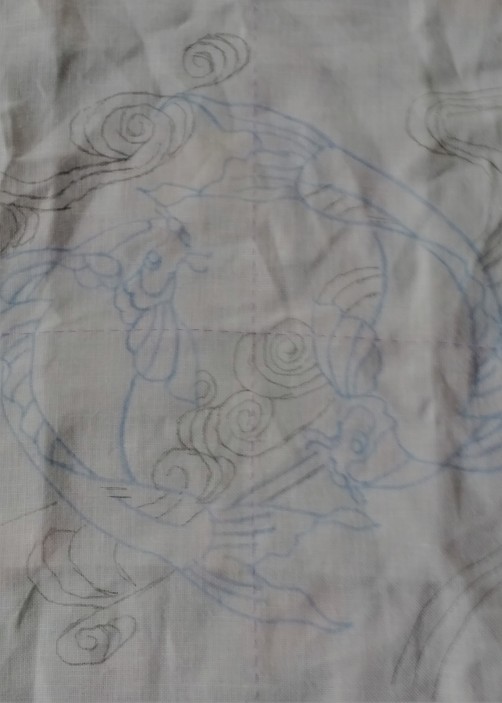 The ground chosen is an almost-white 40 count linen, hemmed on all four sides.  I’ve marked the center with basting lines of old, non-crocking plain old sewing thread.  I will be picking them out as I encroach upon them because there is no central guide purpose they serve after aligning the initial tracing.  I will be using silks, mostly.  Originally I thought I’d be stitching only in a hand-dyed natural indigo, colored by (and occasionally available from) my Stealth Apprentice, but last night I changed gears and have added some commercial Au Ver a Soie Soie d’Alger, in a deep green.

I will be working my two fishies in a combo of styles.  The fish themselves will be done in inhabited blackwork, with fills inside strong outlines.  I’ll pick the fills on whim as I go along, and possibly come up with some new ones along the way.  The fish will not be direct opposites of each other – the inner detail will vary, but one will definitely be lighter (using less dense fillings) than the other, and placement of the blue and green may swap.

Right now I’m toying with doing something different for the outlines, instead of my usual plain old chain stitch.  Not sure yet what, but I do want to vary the width of some of them analogous to heavier brush strokes.

The water lines will probably be done in gold or silver (maybe both), possibly simple couched strands, possibly something else.  I bought some heavier metallic threads at the Sajou store in Paris, and have been hoarding them for the right project.  They may well come into play here.

And the first little bit – a filling from Ensamplario Atlantio, the fourth part: 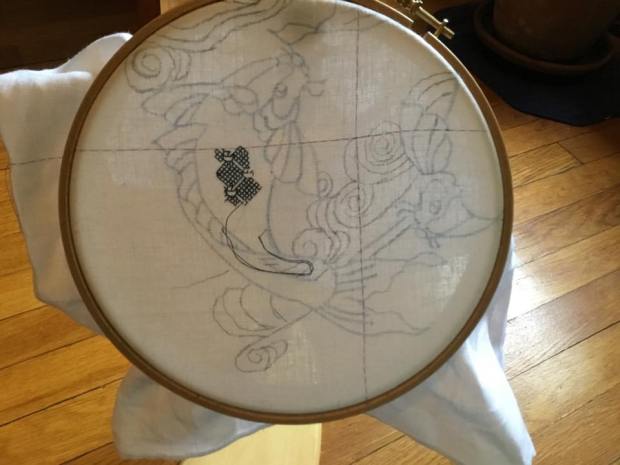 So.  Do I have a plan? Kind of.  But I still like the fun of designing on the fly.

Leave a Reply to A Driessen Cancel reply