UPDATE:  REVISED PATTERN FOR FINGERLESS WHATEVERS IS NOW AVAILABLE AS AN EASY TO DOWNLOAD PDF AT THE KNITTING PATTERNS LINK, ABOVE.

Day 41 of the monitor hostage crisis. Will the unholy alliance of Samsung and UPS actually deliver?? Odds are not in my favor…

Seriously, thank you to eveyone who has offered up a monitor or pointed me at low-cost sources. This is a highly computer-enabled household, my not wanting to use one of the kids’ machines, The Resident Male’s deck or even the house server is more a matter of territoriality. This is MY set-up, and I want it to work. Right now I’m using MY laptop – older, slower, but enough for when I need to tote a machine with me on a consulting assignment. I can access my stuff on my base machine via VPN, and drive it remotely. It’s slow, a pain, but it works. So my whining is mostly about lousy service, not deathless need.

If you do have a spare monitor, please consider donating it to a local school, library, literacy program, shelter, or other worthy cause. They need it far more than I do.

I still don’t quite know what this project is. I’m torn bamong doing?the fiddling to make gloves with abbreviated fingers, settling for truncated mittens, or something shorter like a pulse-warmer or cuff. In any case progress is being made. I have settled on an eye-popping combo of the Lorna’s Laces Socknitters Rainbow, and bleeding scarlet Dale Baby Ull. Interestingly enough, the red Baby Ull is perceptibly thicker than the charcoal black. I’ve used the black in combo with the Lorna’s on a sock, and found them much closer in weight. This isn’t unsual, many yarns sport thicknesses affected by the specifics of dyeing one color or another. Blacks, whites and natural undyed hues are sometimes different from other colors.

Here we see the proto-wristlet. After much experimentation, I’ve arrived at something that’s working: 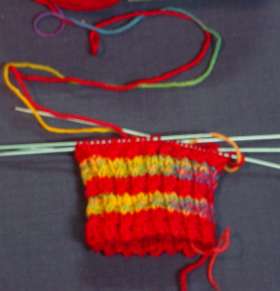 In a counter-intuitive leap, I ended up having to use LARGER needles to make something that stretches enough. I moved up to US #1s, and used the stretchiest ribbing I know. It’s a K2, P2 variant with the two Ks twisted every 6 rows, making them into 1×1 mini-cables. To avoid looseness, I work the crossing as a twist stitch rather than as a true cable by knitting two together, but NOT slipping the result from the left hand needle, then re-inserting the needle tip into the end-most of the two just knit together. That stitch is knit, then the entire two-stitch unit is slipped onto the right needle. I picked up this trick from the stitch glossary in Walker III.

The pattern so far:? Cast on 64 stitches, work in the cabled rib described above, alternating colors every 6 rows. Exact length of how far to go or what to do next has not yet been decided. (It must be pretty evident by know that I leap long before I look, knitting-wise.

Yesterday’s comments and letters brought several speculations on why big box stores stock a different mix of yarns than do specialty yarn shops, and observations of a convergence.

I think the posters were right. It’s got to be an “economics of scale” phenomenon. Big box crafts and discount department stores buy in huge lots. They use the size of their purchase to negotiate price concessions from the manufacturers. Lion, Caron, and a couple of others can supply yarn in ISO shipping container sized lots (the huge boxes that stack the decks of freighters, that are lifted off to become truck bodies). That’s the quantity larger stores typically purchase.

Even medium-sized big box stores can buy in larger quantities than LYSs. Here in Eastern Massachusetts we’ve got? small sewing specialty chain called “Fabric Place.”? They’ve always stocked yarn, but over the past five years have greatly expanded their department. They’ve also cornered the local market for Reynolds Lopi because they were able to offer it at a far lower price than smaller shops. Although Lopi had been a good seller at most local yarn shops, sales fell to zero in the face of competition – especially from FP’s special sales, in which it was marked down to $1.50 per ball. All the smaller shops dropped the line, and the only source of Lopi around here is now FP (which hasn’t offered the ultra-low price in a long time.)

Right now in this area the big box crafts store/distributor combo?that is evoking the most ire is A.C. Moore. They appear to have cut a deal with the distributor Knitting Fever. Now that doesn’t mean you’re going to find Noro yarns at Moore. It does mean that many of the other lines that Knitting Fever handles – Sirdar, Schachenmayer, their catch-all Euro category, and even On Line products are showing up there, at prices below what LYS can meet. I predict that as a result, LYS will be decreasing their stocks of Knitting Fever yarns – they just can’t afford to fight a store with Moore’s retail clout.

Is this good for knitters?? Yes and no. Yes in the short term. It means yarns for less. No in the long term. It kneecaps a major source of support for knitting and knitters. Big box stores are notoriously fickle, and known for limited at best customer service. I dread what will happen if they suck up too many yarn lines. LYS, already under attack from?web-based competition?will have additional pressures in their fight to stay open. Some will die. ?And when the knitting trend crests and the big box stores move on to scrapbooking or whatever fad is next, we’ll have even fewer sources for both yarn and advice.

What can we do about it?? Support your local yarn store. If you’ve got one nearby and?can afford it, buy there. Think of that extra 25 cents per ball as an investment in having hands-on help, and a source of other yarns?available. Please, no whining about lousy and or snooty?LYSs, how you live on a fixed or student income, or that the closest one is 100 miles away. We’ll save those complaints for another day.

Japanese-import or derived comic books. More like?graphic?novels, actually. There’s a big cross-over between manga and anime (Japanese animation) in stories, artists, and look/feel. ?If you know the TV cartoons Sailor Moon, Ruroni Kenshin,?and Yu Yu Hakusho you’re familiar with the aesthetic. Subject matter is all over the map – everything from romance novels to mysteries, the supernatural, history, and hard science fiction. Many are quite adult in theme and depictions, but others are aimed at a more teenage audience. They’re all the rage in the junior high and high school sets. The Older Daughter loves them.

Don’t tell her but I like them too. Maybe someday I’ll confess about the eight collectors’ boxes of ’80s vintage comics we’ve got squirreled away. I think she’d like Lone Wolf and Cub, and the not-Japanese?Stinz.